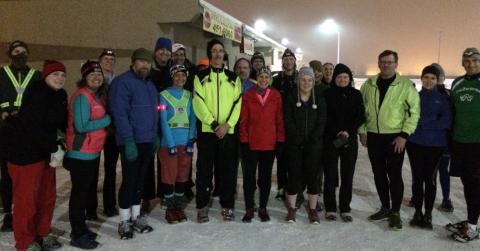 Local runners brave the Fairbanks cold for another RCN New Years Eve run event? Actually that was last year’s headliner. This year’s headliner was how few clothes can one wear and still not get overheated or arrested! 31°F ABOVE greeted the 25 runners who showed up to put another NYER in their log books. A cast of mostly regular New Years Eve running revelers showed up to start RCN’s 2014 Annual New Year’s Eve run. The 11:30pm start at “The Diner” parking lot on Illinois Street had foggy conditions settling in as the Midnight hour approached.

14 men and 11 women cast off on the 3.24mi course. Nick Shamrell took first overall in 21:47 with Greg Finstad in second with 22:24, narrowly edging out Dave Spencer, Alias “Sancho”, at 22:42! Krynn Finstad was secure in her Women’s first with a time of 24:21. Women’s second was scooped up by a visiting local Violinist (it’s a long story) Ms. Caitlin Warbelow from New York City. 26:35 was enough for second even with pressure from Jane Lanford’s 27:12 for third.

These balmy temps allowed for some lingering about the finish line for chatting, pictures, cookies, prizes and straight-up cool water refreshment!  Hot Chocolate is always welcome too! Overall, 25 folks showed up, got a run in, had a safe fun event and put it down for another New Years Eve Run sponsored by Running Club North.