Flat, paved, out & back, via Chena River Bike Paths

When the siren started wailing, 132 runners briefly sought counsel, and then took off sprinting, chasing that ambulance north on Barnette towards the river. Runners in the Briefcase Relay Division, who were dressed in coat and tie and toting their 5 # briefcases, were given a head start to try and catch that ambulance. In the 10K race, Mike Kramer, 34:00, finished nearly a minute and a half ahead of Brent Peterson, 35:27, in the Men's Division, while Michelle Mitchell, 40:11, continued her win streak with a closer win over Tina Devine, 40:47, in the Woman's Division. Larry Coutermarsh, 41:07, won the Wheelchair Division. In the 2-mile race, Ian Smith and Anders Gillis both clocked in at 13:12, and Adele Mery led the women with a 16:23. Complete results were not available for the Briefcase Relay Division. 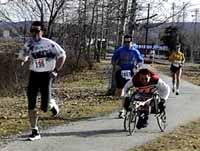 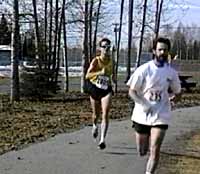