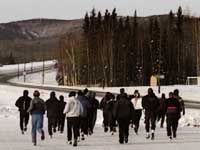 A large field of 32 men and 9 women enjoyed some nice sunshine and not-too-cool temperatures on our first Miller Hill run of the year. The roads were icy in many spots, but no runners were spotted sliding through intersections on their backs this year. However, on Miller Hill, our 'official' videographer yielded to 3-abreast runners and oncoming traffic and found herself and her guest in the ditch. Aided by a good samaritan motorist with a Jeep and a tow cable, and the three 30th place finishers, she was soon back on the road - with much encouragement from all the passing runners.

It was a fast field, with nearly 25% of them, 10 runners, finishing the hilly course in under a 7 minute/mile pace. Overall winner Mike Kramer (39:07) was closely shadowed by Bob Murphy (39:20); women's winner Michelle Mitchell (44:01) had more breathing room, with second place finisher Jane Hollingsworth (47:34) over three minutes behind her.

Photos from video, and editing, courtesy of JFM Videos.