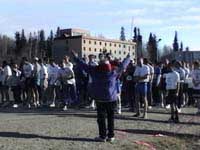 It felt like spring this morning and, despite the snow still on the hills around Fairbanks, most of the snow has melted off on the UAF Campus. The geese have not returned to Fairbanks yet, but are within 100 miles as they're on the ground in Delta. 'Great day for a race' seemed to be the consensus among runners as nearly 50% more runners, 308, turned out for this year's 5K than last year. Except for a few icy and snowy areas at the top of the first hill, the course was mostly bare and dry. Conditions were excellent for running a good time on this hilly and not-so-fast course.

The spring running season is on.

Photos and photo editing are courtesy of JFM Videos.