The Northern Trails Running Series was started in 2008 with a mission of increasing the participation in local trail races and introducing runners and hikers of all levels to new trails. The series, created by Matias Saari, had six events in 2008: Masochism on Moose Mountain, Ester Dome Ass Kicker, Granite Tors Trail Run, Chena Hot Springs Run & Soak, Mount Healy Challenge, and Run for the Refuge (10k). Events in the series are subject to change each year depending on participation and feedback.

More information for each of the events can be found through the running club calendar link.

* The Toghetthele Trail Run (‘TOG-uh-TEE-lee’, which in Athabascan means “hill on the river”) is the new name of the first race of the series, as of 2019. The course will be unchanged, but the new name better honors the Alaska Native history of the area and reflects the name of the area. The event is now a fundraiser for the Nenana High School XC team. We use the name with the permission of the Toghetthele Native Corporation.

A new point system tracked runners in the 2011 season. The new point system is intended to account for increased participation in trail series events since the inaugural 2008 season. The age groups (29 & under, 30 to 44, and 45 & over) remain unchanged. In previous seasons runners scored points in their best four races in the series. This restriction was removed for the 2011 season; runners may now score points in all trail series events in which they compete. Awards for the overall Trail Series champions and age group winners will be presented at the annual Running Club Social in the fall (see our events calendar for details). 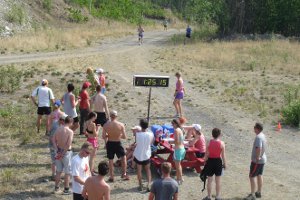