Two days after the Equinox Marathon, my wife Susan and I boarded a plane and headed east. It was the begining of a 5-week vacation and what better way than to go somewhere you’ve never been before, where you can’t speak the language, and then run a marathon. We had talked of a trip to Italy for almost a year. When it became more than just talk I decided that it would be great to find a race to enter. I’d be somewhat in shape and it would be one more adventure to add to our travels. Since we were primarily headed to Italy I hoped that I’d be able to find one there and hopefully sometime later in October thereby giving me a little bit of a rest from the Equinox (21 September 2002).

Surfing the web though, the only thing that really seemed to work out was the Budapest Marathon. Our friends, Carol and Will in Budapest, always say they’re happy to see some familier faces so we took them up on it. You couldn’t ask for better hosts. They put us up, fed us, showed us how to get around, where to catch buses and the Metro, gave us the basic Hungarian words, etc. Following are some of the thoughts from my journal after running the Budapest Marathon. 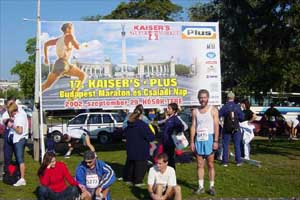 Sunday, September 29 Up about 6:30. Didn’t sleep very well. Had a lite breakfast and coffee. Off about 8:15 with Susan and Carol. Took the bus down to the Metro station, and the Metro to Hero’s Square well ahead of the 10:00 start. I went off to change while Carol and Susan scouted around the finish area and planned where we could meet after the race. After I returned they headed off to the Szchengy Bridge area. It’s a spot that the course passes on several occasions during the race. I had little time to warm up so crawled under the rope and crowded in line a couple hundred feet behind the start line.

Great weather today after overcast, cool, windy, rainy days since we arrived. Around 50 degrees and clear blue sky. Fireworks went off to start the race right at 10-maybe a minute or two early by my watch. It took 1:45 to cross the starting line. Ran down the tree lined boulvard towards the river for the first 2-3 K. Missed Susan and Carol at the first crossing point. Across the Szechenyi Bridge and turned south to do an out and back. Warm in the sun, broke into a sweat. A bit breezy and cooler when the course turned north. Feeling pretty good at this point. Crossed the Danube River heading east on a bridge south of the Szechenyi Bridge. After crossing, the course turned north. Passed former Fairbanks friends Chris and Steve Wilson somewhere around 10-15 K. Steve and Chris are now working at an American school in Belgrade for a couple of years and came to Budapest to visit us and the big city.

Still feeling ok but already have doubts how I’ll hold up. For some reason my left quad was really tight. Ran north until Arpad Hid Bridge where once again we went west on the bridge about halfway until Margaret Island where we ran north thru the length of the island. The island is a park and although on pavement, it’s a pleasant run. At the north end we continued west across the Danube. After reaching the west shore the course ran through Obuda (Old Buda) and it was just north of Obuda that we crossed the halfway line. The course then turned south for a distance, crossed the Danube again, another turn north where once again I saw Susan and Carol. At this point I still felt I would break 4 hours but wasn’t sure by how much. Tired, my quads hurt and mentally was losing it.

Was at 32 K at 3:01 The last 10 K was not the most scenic or inspiring part of the run which didn’t help. The course left the river about 36 K and wound thru an older, more depressed business/residential area before re-entering City Park and Hero’s Square. (There was a statue of Lenin here untill 1989 when the Hungarian’s revolted against the Communists.) I was really surprised to pass a few folks within the last 1 K as I was pretty well depleted. Although it wasn’t great English, I did hear my name and USA called out as I crossed the finish line at 3:57.

I figuratively collapsed in the area fenced off for the finishers. I collected my bag of goodies (soda, cookies, and even a can of beer – unfortunately it wasn’t cold.) handed out to finishers, a cup or two of water and found a patch of grass to land onto. I knew Susan and Carol would be waiting for me as they cheered me on just before the finish line so after a few minutes rest was off to find them. They were right outside the finish area so found them much easier than anticipated in a crowd of several thousand. Recovered a bit before returning the ‘chip’ for my 5000 Foirents (about $20) deposit.

Big festivities going on. It was Family Day with 4 K, 7.5 K, 1/2 marathon, marathon, and marathon relay runs along with food, kids activities, bands every hour from 3-7 PM and fireworks to end it later in the evening.

I was too tired and already too hot to take advantage of the Szechenyi Baths which was included with race registration. Hungary is well known for it’s thermal baths, the Szechenyi Baths, are some of the best known. So, took the short but somewhat slow walk back to the Metro and headed ‘home’.

Epilogue: Some food and a soak in the tub at home felt great and helped to start the healing process. I was fatigued and a little stiff for the next couple of days but survived without any real injuries. My original goal was optimistic, a 3:20-3:30 time for the race. Realistically I expected to break 4 hours, but didn’t really know how well I’d do having run the Equinox Marathon 8 days previous, traveled more than 8,000 miles crossing at least 10 time zones, to fly from Fairbanks to Budapest.

I just received a finishers certificate and race results last week – mid-December 2002, and it confirmed what I had already known: I passed the halfway point at 1:45, right on pace for a 3:30 time. But with my finish in 3:57, I was 25 minutes slower on the second half.

Here’s how the official results described the day. “The Day of Running 13 600 PARTICIPANTS AT THE KAISER’S-PLUS BUDAPEST MARATHON AND RUNNING FESTIVAL “29th of September rightly bearing the epithet: The Day of Grand Running, as a total of 13 600 runners lined up at the start of the 17th Kaiser’s-PlusBudapest International Marathon and Running Festival to complete one of the three different individual on two relay courses. This was the day, when all professional and amateur runners had the change to match their individual physical preparedness level to one of the courses. What is more, ten different courses where available for those who chose to enter the race in teams.

“On day before the race attractions started with a huge Pasta Party. The weather was murky and rainy as competitors arrived at the sight of it, a huge tent was assembled along Dozsa Gyorgy Avenue, but luckily on the next day, the day of the Grand Running there were no traces of those gloomy clouds at all. Those running the classical marathon distance started out at 10 a.m. from the start line set at Hero’s Square together with the first racers of the Marathon Relay and Ekiden run. Nearly 3000 runners shot out from the start line as the cannon fire marked the start.

“As usually, the race ran a magnificent course leading through the most beautiful parts of Budapest. Thus the nearly 700 foreign runners and those 900 coming from the countryside had the possibility to admire the houses and palaces of Andrassy Avenue, which has been recently named as part of the World Heritage, as well as the enchanting skyline of both the Pest and Buda Banks of the Danube river.

“The Felvonulasi Squiare, the main staging area of the Marathon courses was the place where both racers and onlookers had the possibility to have fun and enjoy the attractions and programs as the main stage hosted singers, comedians, and magicians. The afternoon concerts were followed by a spectacular firework, which marked the end of the KAISER’S-PLUS Budapest International Marathon and Running Festival.”