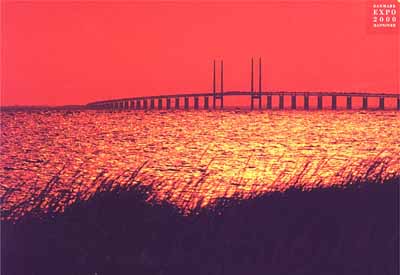 For the first time in history it’s now possible to drive from Scandinavia all the way to the Mediterranean. And that’s thanks to the new Oresund crossing – a combination tunnel, causeway and bridge – which spans 8 miles of open water connecting the Baltic and North Seas, and joins Copenhagen, Denmark with Malmo, Sweden. Before it’s official opening on July 1, a 3-day weekend in June was set aside for runners, bikers, walkers and skaters to enjoy the crossing.

Eight of us stayed together in Copenhagen – five runners (Didi, Georgie and Jule Kostros, Peter Stork and I) and three very fine supporters/photographers/videographers (Matthias Kostros, Monica Stork and my wife Jo). We’d all arrived in Copenhagen on Saturday June 10 (biker’s day and skater’s evening on the bridge). That Saturday afternoon was beautiful with completely sunny skies, no wind and temperatures in the 80’s. Ideal conditions for enjoying the outdoor canal-side restaurants in the New Harbor area, but not for running. We tried to stay cool and waited for the temperature to drop. Sunday (walker’s day) greeted us with a few scattered clouds, but again with hot temperatures – perfect for sightseeing Copenhagen. Pizza, pasta and beer, on the sidewalk, was our treat that hot evening just before our run.

That night the wind blew hard! A change in the weather perhaps? Fortunately for the 130,000 runners (or was it only 78,000), the answer was YES. Monday morning dawned cloudy, windy, gloomy and cold (55-60 degrees).; and it didn’t change.

The race was designed with staggered starting times, in order to accommodate the crowd: Elite runners (the real and only race) started at 9:15 AM, followed by several groups of ‘slightly-less elite’ runners; the 10 AM to Noon slot was reserved for us, the ‘Foreign Runners’ (all non-Danish and non-Swedish runners); the balance of the day, Noon to 6 PM, was reserved for Danish and Swedish runners, with each hour reserved for specific postal zip codes – clever people!

We breakfasted early and caught the public bus to downtown before 9. We were all so confident that we didn’t have to pay to ride the public bus, because we were runners, that we just marched on board and smiled at the driver, and he didn’t say anything to us.

Once downtown we stood in our first line (it was to be our shortest line of the day – but we didn’t know that yet). Here we boarded the charter busses to our staging area in the park, which I had guessed to be about 1/4 – 1/2 mile from the Start!. None of the maps were drawn to scale and all were done in either Danish or Swedish. Unfortunately, the Start line lay at least 2 miles from the park.

At the park, as we again stood in line (a longer line) to receive our Champion Chips, we were able to watch live on a giant screen, the lead Elite runners exit the tunnel, cross the causeway and climb the Bridge, 25-30 minutes into their race.

That race was long over by the time our group of about 1,500 reached the starting cell, just before 11 AM. About 20 minutes earlier we’d passed by the drop-off point for our Broloppet ‘rucksacks’, leaving our warm & dry clothing – so we’d been out in the cold wind, walking slowly or standing still in our running gear for some time. But there was an excess of body heat around so it wasn’t that cold. Finally our group advanced into that final cell and our 5-minute countdown started.

And then we were running – it seemed kind of anti-climatic. Almost immediately we headed downhill and into the 4K tunnel – we were all running in the two westbound lanes of the crossing; the eastbound lanes were being used by the busses. It was quiet in the tunnel at first: only the sounds of runners feet, lots of talking, occasional flashes from the cameras that many runners carried. But the noisy overhead ventilator turbines finally started up, as the hordes of sweaty runners raised the humidity in the tunnel.

Once out of the tunnel, we crossed the level gravel causeway and ran onto the bridge approach (another 4K). We had a strong tailwind, but it wasn’t much of a factor – even though we spent a considerable amount of time facing that direction for the many photos that Didi and I took of each other as we ran. Surprisingly, it was fairly easy to run around people and groups of people.

As we climbed the approach to the suspension span of the Bridge, the beauty and simplicity of it’s design began to sink in. What a Bridge! As you looked down the length of the Bridge (8K) and up to the sky, there was nothing to block your view, even when crossing between the Bridge towers: they were free-standing on either side of the Bridge, not joined together. And, once you reached the center of the span, you had a clear view off to the side of the Bridge also: there were no cables blocking your view.

The center of the span also marked the boundary between Denmark and Sweden evidently, as there were banks of loudspeakers on the Bridge broadcasting Swedish radio rock music! I think they were also welcoming us to Sweden, but I’m not sure (they might have been warning us not to relieve ourselves in public; but again, I’m not sure). We crossed the center of the Bridge at 12 Noon, somewhat ahead of schedule – for our non-running support crew was just leaving Copenhagen on the Noon ferry to Malmo, a 45-minute trip.

The run downhill to the far shore was really anti-climatic – easier running, but we still had a long way to run to the finish. We stopped once for some photos back of the center span, but mostly we just ran, trying not to think about the distance that lay in front of us – for the exciting part of the run was behind. The Swedish shoreline greeted us with an odor that seemed like a cross between a sewage treatment plant and a lumber plant that processes wood pulp – it was a strong, aggressive odor. And it seemed to follow us for a way, as we ran north towards Malmo along the last 5K of the course.

But now there were people along the edge of the course, cheering us along. In the last few miles of the course, the crowds grew larger and noisier. Finally we rounded the last of the many curves near the end of the course, and there it was: the Finish Line and a plastic blanket to break the wind. And that was the end of the race – but little did we know that we wouldn’t return to our bed and breakfast for another 6 1/2 hours!

We also didn’t realize that the distance from the finish line to the area where our rucksacks could be reclaimed, would turn out to be another 2 miles or more! So, still fenced off from the outside world, we continued our walk to the north – pausing for water and candy bars. Then there was a wide spot in the road: long benches where we were supposed to sit and remove our Champion Chips; after which the pathway narrowed once again and we were funneled through checkpoints where we were watched as we deposited our chips into large pails.

For doing this we were rewarded with our Finisher’s Medals, a commemorative towel, and a plastic bag to fill with the food and drink that lay ahead. Life was good, but my banana was a little green. As we continued to walk north, we again realized that the map of the finish area was similar to the map of the start area: it was not drawn to scale.

By now we were out of the controlled area and we needed to find our rucksacks and our warm clothes – for the wind was cold as it swept across the huge open fields where the bags could be claimed (after you stood in line again, of course). Fortunately for Didi, we found his bag right away – but mine was nowhere in sight.

It finally turned up in an adjacent claim area, about 45 minutes later, but by that time I was starting to get a little cold. Didi had found our three supporters, at our meeting point, and we had a brief reunion and a bite to eat together on Swedish soil. Then it was time to head back to Copenhagen: they for the 30-minute walk back to the Malmo ferry terminal, and us to join the orderly masses waiting for the busses on yet another large grassy field (our longest and largest line of the day).

Everything was extremely orderly in these lines, but extremely slow. Busses operated in groups of 12 – and there were 12 groups of busses. Each 5 minutes an empty group of busses pulled up on the roadway, loaded and departed for Denmark. Some busses were larger than others, but we figured that probably 8-900 runners were being moved out every 5 minutes. And we stood in this line for nearly 3 hours!

By 5:45, we were finally on the bus and had a chance to sit down. We thought we were home free – back to the park, onto the charter bus to downtown, then public bus home. But, when our bus reached the far end of the tunnel, stopped on the roadway and opened the doors, we realized that we had more walking to do. Now, we reversed our course along our earlier route to the start area! Once we reached the park, rather than wait in line (again) for the charter busses, we opted to take the public bus back to downtown.

And on this bus, the crusty female driver made it clear to us that we had to pay for our ride, runner or no! A quick ride back to downtown, preceded a long wait for our connecting bus. We finally reached home at 7:30 PM, long after Jo, Monica and Matthias had returned from their ferry trip. We finished off our long day with more pizza, pasta and beer – although not outside on the sidewalk!

For a one-time event, the Broloppet was remarkably well organized – it had been well thought out in advance, to the point of providing all runners with rucksacks for their dry clothes, a large identification number and name to attach to the sacks, water belt and small bottles for the run, plastic raincoat, etc. The only problems were with reclaiming the bags – which was disorganized in some areas but ran smoothly in others – and the long wait for the busses. But we finished during rush hour, so we had the longest wait.

Our run time of 1:55 for the 1/2-marathon course wasn’t all that bad, when you consider the congestion and the number of photo stops that we made along the way. This was a once-in-a-lifetime opportunity to run across the Oresund Bridge, which has since opened to traffic. Now the easy way to cross is by train from downtown Copenhagen to downtown Malmo! For those who prefer to drive, the toll will probably be unlike anything that we’re used to in this country: a similar but shorter bridge crossing to the west, completed around 1995, has a one-way toll of over $26!